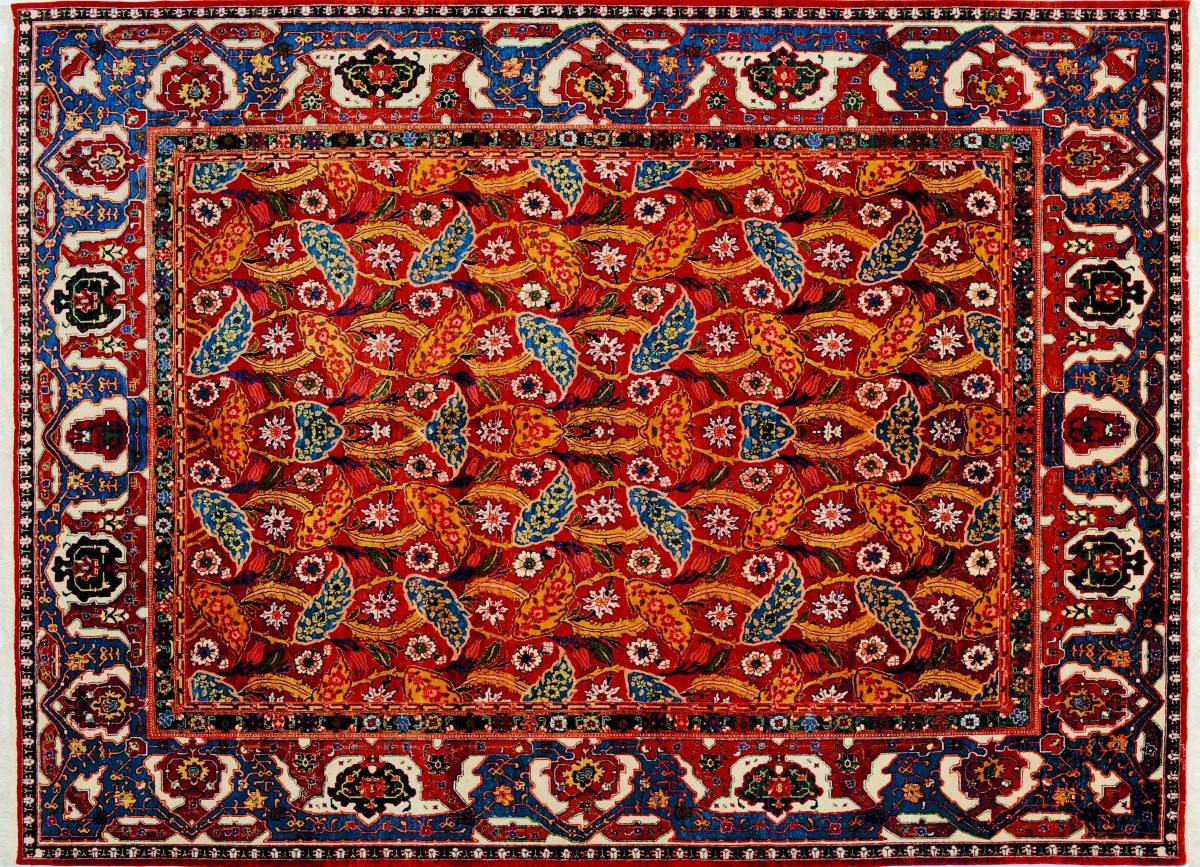 “Oriental rug” refers to heavy, handmade and hand-knotted rugs that utilize natural dyes—typically made from materials such as silk, wool, and cotton—made by weavers throughout a region in the Eurasian continent known as the “Rug Belt.” The Rug Belt stretches from Morocco, across North Africa, and into central Asia and northern India. It includes modern countries such as China, Tibet, Turkey, Iran, India, and Pakistan. Rugs produced in modern-day Iran, Iraq, and Turkmenistan—all formerly part of the Persian Empire—are still known as Persian rugs. As a rug and weaving identifier, “Oriental” cannot necessarily be called accurate, but has nonetheless cemented itself in artistic weaving terminology over the course of centuries to mean rugs originating from the Rug Belt.

High-quality Oriental rugs and weavings can range in size from pillow coverings to large, room-sized carpets, and can range in use from floor coverings to decorations for animals, carrier bags, and religious use as Islamic prayer rugs, Jewish Torah ark covers also known as parochets, and Christian altar coverings. Many different cultures, countries, racial groups, and religious faiths were involved in the production of “Oriental Rugs,” and thus they are known for their richly diverse and varied designs. There are, however, common traditional elements and characteristics that can be used to identify a carpet as “Oriental.”

Oriental rug designs are often described as either rectilinear or curvilinear. Rectilinear patterns tend to be bolder and more angular, with abstract and highly stylized motifs. This style is often associated with nomadic or village weaving. Alternatively, curvilinear rugs show floral patterns and figures in a more realistic manner, with fluid images and often more complicated weavings.

Oriental rugs can also be described and categorized by the manner of organization of the rug’s surface. Most Oriental rugs feature the field—the open center space—surrounded by multiple borders, often with one wider, main border and smaller, “guardian” borders. This main border can also be filled with elaborate floral or geometric designs. The rug’s field will likely showcase a complex medallion at its center, possibly decorated with similar, smaller “pendants.”

Behind the central medallion, the rug’s field can also have a variety of designs and patterns that offer insight on the carpet’s history, origin, and its craftsman. One single, basic design covering the entire field is known as an “all-over design.” Interwoven ornamental patterns covering a rug’s field can form an “infinite repeat” pattern. The design of a rug and the motifs included are greatly influenced by the rug’s origin. For example, Islamic designs often include patterns being intentionally cut off where the rug’s field meets its borders—to suggest that the patterns continue beyond the border of the rug itself, as well as Islamic design principles discouraging the depiction of animals or humans, with more focus placed on writing and ornament. Heriz rugs, Turkish rugs, Tabriz rugs, etc. all likewise have their own design principles.

Common Motifs and Their Significance

Boteh (or buta) is a Farsi word used to describe an immature flower or palm leaf, and in design resembles a drop of water, or a sloping seed. On rugs, the boteh is often found in cluster, all-over patterns, but can also be found in isolation in more intricate, artistic weavings. The boteh can also be seen to decorate royal regalia, crowns, and court garments in Iran during the Qajar and Pahlavi dynasties, as well as textiles used by the general populations. Some design scholars believe that the boteh is a convergence of a stylized floral spray and a cypress tree, a Zoroastrian symbol of life and eternity. The ancient design gained attention in the Western world when seen decorating Kashan kashmir exported to 19th century Scotland, and the design was utilized in the now-world-famous paisley pattern.

The Farsi word for flower, gul (or gol) describes an octagonal, angular, medallion-like design thought to be derived from the shape of a rose. This is traditional to woven fabrics from areas of west and central Asia, including regions formerly part of the Persian empire such as Iran, Iraq, and Turkmenistan. Naturalistically designed rosette medallions were often seen in Persian rugs, while Azerbaijani and Caucasian rugs had a much more varied vocabulary and patterns when utilizing the gul design. The design was meant to tell the story of the rug it was woven into, providing clues about the rug’s source, age, construction, and value with its intricacy and stylization. As a design element, the gul often represented native plants or flowers, and bodies of water when done in traditional, angular shapes, and stars, suns, or other celestial bodies when woven with a rounded style. Often seen in all-over or repeated patterns.

This pattern gets its name from the city of Herat, in northwestern Afghanistan. The symbol is comprised of a stylized or naturally rendered flower / rose, inside of a diamond or rhombus, and surrounded by four acanthus leaves—these leaves are sometimes also called “fishes” or even depicted as fish in weavings. For this reason, the herati pattern also has the nicknames “Fish Pattern” and “Mahi.” This pattern is thought to be a symbol of auspiciousness, and to bring good luck to the household, and can often be seen utilized as an all-over or repeated pattern in order to accentuate the rug’s borders. 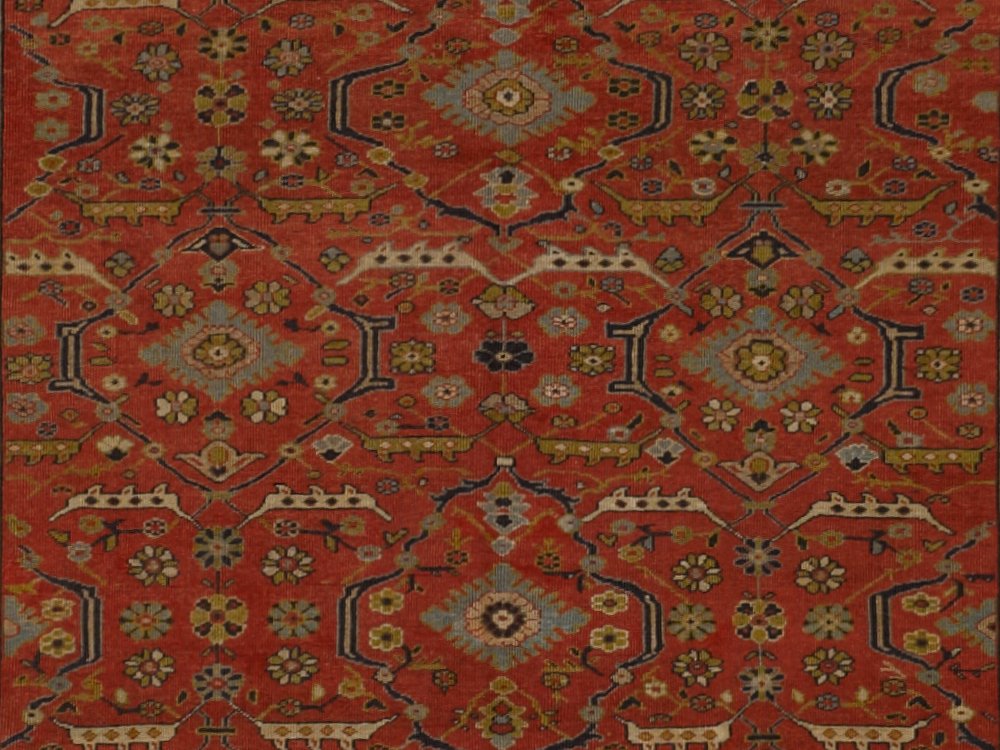 This distinctive pattern features repeated daisies interlinked by a diamond, or by curved, circular lines. The Mina-Khani is present on many Persian rugs, but is used regularly in many different rug types and designs, and is not representative of any one specific area. There are, however, various workshops that work in almost exclusively Mina-Khani designs, such as those weaving Varamin rugs. 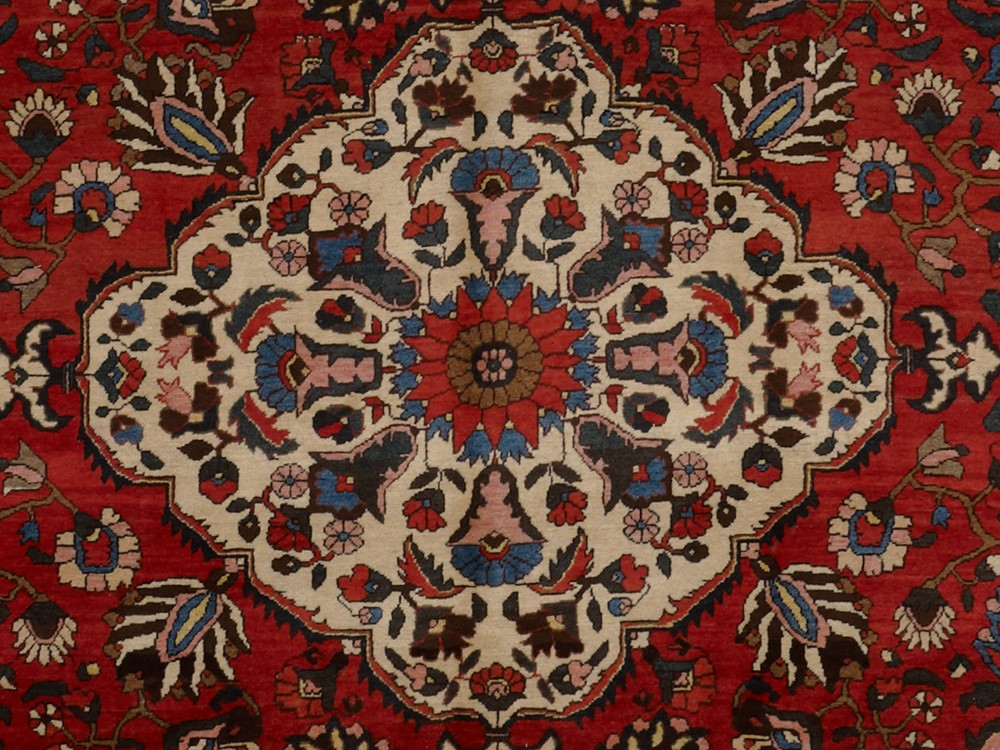 The rosette is a circular arrangement of smaller motifs radiating out from a central medallion, to suggest the petals of a rose. These floral motifs can be expressed naturalistically or geometrically, and while most commonly limited to the field of the rug, have been seen to also decorate a rug’s borders.

Also called the arabesque flower, the palmette is one of the most common motifs found in Persian rugs—most namely in the rugs of Tabriz, Kerman, Isfahan, and Qum during the Safavid dynasty. Where the gul could represent a horizontal cross section of a flower, the palmette represents a vertical cross section, though with a highly stylized design that is not meant to specifically resemble any known flower species. The palmette is believed to have originated from the spread-petal lotus design as a symbol of eternal life, and is also found throughout many cultures in connection to the Tree of Life and the divine.

Interested in authentic, handmade antique rugs from the Rug Belt? Matt Camron has resources for education as well as a guide to help you find one to call your own!