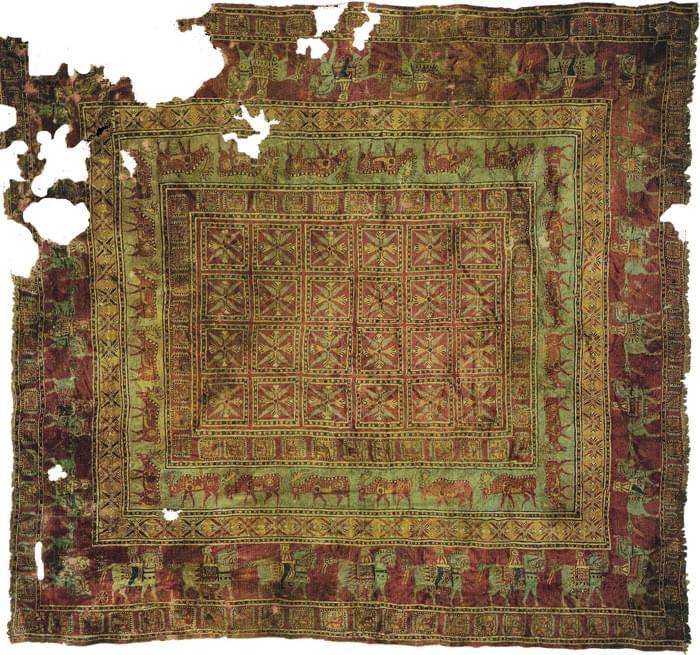 The oldest hand-knotted oriental rug known was excavated from the Altai Mountains in Siberia in 1948. It was discovered in the grave of the prince of Altai near Pazyryk, 5400 feet above sea level, and clearly shows how well hand-knotted rugs were produced thousands of years ago. Radiocarbon testing revealed that the Pazyryk carpet was woven in the 5th century B.C., thus approximately 2500 years old. The advanced weaving techniques and the sophisticated design and construction, used in this rug, suggest the art of carpet weaving to go back much further than the 5th century B.C.. to be at least 4000 years old. Today the rug is in the Hermitage Museum in Leningrad, Russia.

When the prince of Altai died, he was buried in a grave mound with many of his prized possessions, including the Pazryk Carpet. Unfortunately, soon after, the grave mound was robbed of its prized possessions, with the exception of the rug. The rug was semi-frozen because the thieves did not bother to cover up the hole they had dug to retrieve the items, rendering the hole exposed to the elements within the tomb. The combination of low temperature and precipitation within the tomb subsequently froze the carpet, and preserved it in a thick sheet of ice, protecting it for twenty-five centuries. This somewhat ironic story is the reason that the Pazyryk rug still exists today. 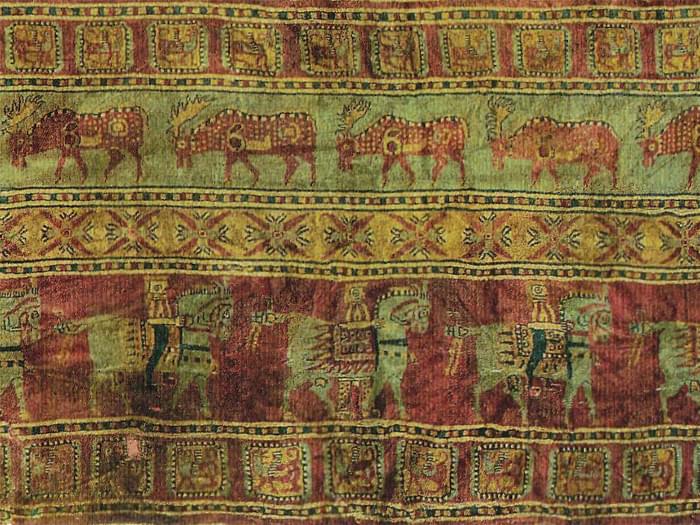 Although it was found in a Scjythian burial-mound, most experts attribute the Pazyryk rug to Persia. Its design is in the same style as the sculptures of Persepolis, The outer of the two principal border bands is decorated with a line of horsemen: seven on each side, twenty-eight in number -- a figure which corresponds to the number of males who carried the throne of Xerxes to Perspolis. Some are mounted, while others walk beside their horses. In the inner principal band there is a line of six elks on each side. 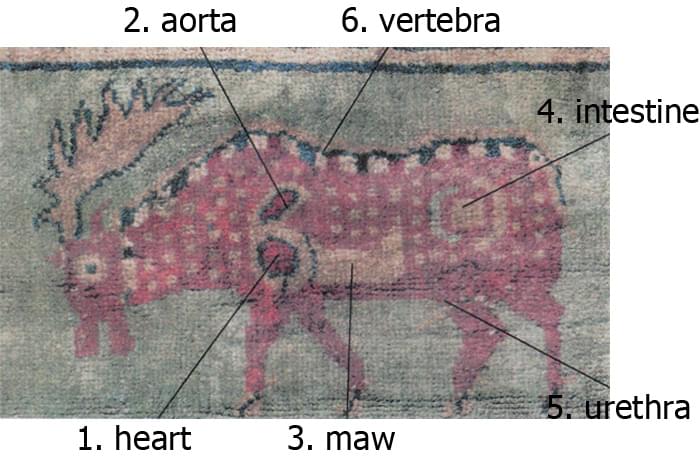 The extra figures inside the elks are depicting the inwards and the vertebra of the elk, all parts in real positions with nearly clinical precision:

1. The heart, just above the, front legs (a yellow framed red sphere, black contoured).
2. The aorta (a long red protuberance on the heart).
3. The maw, on the right hand side of the sphere (a large yellow area with a widening upwards on the end).
4. The intestine, in the rear end (a yellow square surrounded by a light blue and a yellow bow).
5. Possibly the urethra, on the upper part of the right hind leg (a yellow line with a black point), better to see on some others deer on the border.
6. The vertebra, directly below the brown back contour (an alternating black-white chain).